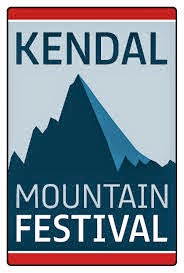 Earlier this year Keen Europe approached me to ask what I thought about speaking at the Kendal Mountain Festival as part of the wild water night, at the time I thought it was a fantastic idea with a lot of potential.
As the summer drew on with European Championships and The International Liffey Descent then moving into the realms of a real job. The time was coming up fast. I had an idea, a theory, a topic. But physically nothing much more to show of it.
I took some time to start drafting a presentation checking theory and references with 9 revisions later I was ready to show the draft. With more and more ideas and fun my biggest problem was having too much content – not a normal issue for many people so I then set about the task of cutting it down. With final draft in hand on a mild Wednesday in November I boarded the ferry and set sail for Holyhead.
After a drive up to Kendal via Manchester having missed the M6 it was dark and finding the hotel was the order of the evening.
The following day came and after a trip to visit Mares UK at their Kendal base to see next years range, I set about exploring the town.
Kendal a quaint town on the edge of the Lake District big enough to be a town small enough to be the country but still green with rolling hills greens and brown of autumn leaves made the place clear and fresh.
Sometimes described as the outdoor Mecca of England had the same vibe as other places Betws Y Coed in Wales and Fort William in Scotland the subtle town with an influx of outdoor enthusiasts at every turn you can spot a mountain equipment, Haglofs, arcteryx jacket leaving North face to the big city fashion Icons this place was function over fashion!
The whole festival centres around a few locations in town, the adventure sports village in the Dojo (this was where my talk would be) and the Brewery Arts centre with plenty of drinking and socialising areas.
The opening ceremony was hosted in the main street with the street closed and the big screen up the event went live with Sir Chris Bonington opening the show to an audience of down jackets as far as the eye could see.

That evening I was given my own personal show ambassador to show me the venues and introduce me to others I was lucky to meet James a really nice guy, a true gent we found ourselves taking advantage of the local knowledge and enjoying the local drinks from nearby brewers. James introduced me to some other lads including Big Sam who was driving for the night but truly legendary in my weekends experience as the evening drew in we were joined by Gillian from Keen UK team and Nol Marketing Manager from Keen Europe plus A few others Graham, Bruce, Rach and Timmy. From Haglofs and Cotswold.
A magic evening of chatting and catching up…. The calm before the storm!

The next morning Gillie was at my door before the sun bringing with her an amazing personality an all round fun girl (slightly mad) but the best craic ever! We headed to pick up Mr Nol, and off we went on a whistle stop tour of the lakes visiting dealers and showrooms before breakfast then taking a coffee break to review my presentation and edit it again into what was the final cut which we were all super excited about.
At 1109 we were at the train station to say farewell to Nol who had another meeting to attend, Im sure next year he will be back to make a weekend of an awesome event!
That left me and Gillie to spend the day meeting some friends and set to work setting up the stand in the sports village.

The stand looked fab with fun and colour as well as turrets of shoes with a sprinkling of autumn leaves, 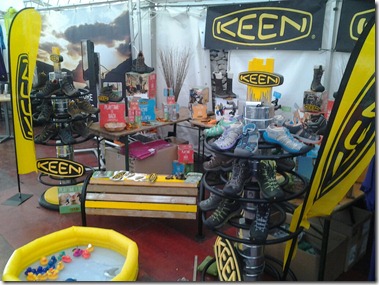 We were joined by Adam from the Keen UK team who brought with him water guns ready for the evening.
I spent some time with the tech team checking the presentation looked ok on the big screen and making sure the videos played.

With the team happy the doors opened with 300 odd tickets sold the venue started filling with a whole range from children right through to seniors it was a great turnout on a difficult slot. The night kicked off with some films from around the world kayaking, surfing and sea kayaking. A short interval gave time for Gillie to muster up her magic with some fun games and activities for all with fishing for ducks and frisbees flying across the crowd keeping everyone entertained.
Next up was me, as always talking to people is one of my stronger points with a solid slideshow and videos upsetting a few people calling them old but generally everyone had a lot of fun, largely due to me breaking the clicker to change slides leading to great entertainment every time I attempted to get it working! The presentation was about the benifits of playtime and how palaytime and escapism could affect peoples daily lives, giving people the opportunity to get out of the nine till five, As I finished up my segment on the International Liffey Descent we ran a nice raffle to give away lots more Keen merchandise.
The keen evening was a great success with some nice videos and fun for everyone.
Over the weekend were 5 sessions with big speakers, Wild Water, Endurance (With the Brownlee Brothers), Bike Night, Ski Night (Andreas Fransson, Bjarne Sahlén, Mike Douglas) and Flight Night some awesome speakers and great videos.
http://www.mountainfest.co.uk/speakers.cfm
What followed during the course of the weekend can only be described as one of the best weekend events I’ve ever seen with literally thousands of like minded people all in one place chatting and meeting the craic was mighty and the banter of epic proportions. Meeting old friends and making new I would highly recommend anyone who loves the outdoors should add it to there calender next year. I was lucky enough to spend some time with the other pro athletes and some very entertaining people with a lot of experience but more importantly I had time to spend with friends.

Thanks to Nol and Muriel from Keen Europe as well as the UK team, Gillian, Tig Dog and Adam and to the lads from Haglofs Graham, Bruce and Timmy and Rachel. An amazing weekend cant wait to get back to Kendal for an Another Adventure.