Student kayak intervarsity’s is one of the largest paddlesport events hosted in Ireland with all the colleges in attendance for a weekend of paddling and socialising,
The 2013 event took us back to Limerick, a sporting mecca some of the country’s finest facilities was sure to produce an excellent weekend.
The event kicked off with the canoe polo competition in the UL Arena with the event favourites GMIT Galway getting knocked out in a high tension semi final against Maynooth before the heroics of DIT against Duck put them into the polo final, A hard fought game brought Maynooth out on top to take the win. 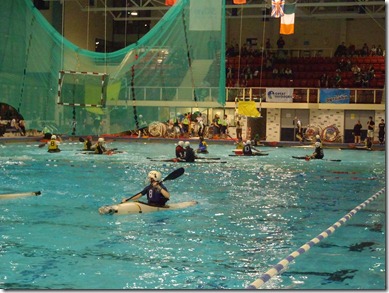 Saturday started way too early after the night before with clubs meeting at the UL boat shed at 0630 to load up and head out to the castle connell river a simple section with some slalom gates thrown in for good measure saw the event hosts University of Limerick come out on top with a smooth display.
The afternoon saw the masses arrive ready to take on the long distance event, this is the part of the weekend where numbers matter, getting the most people on the water as possible shows strength in college paddlesport programmes with plenty of people participating from the fast K1s through to open canoe and general purpose classes. Once again for the second year in a row Tom Brennan from Trinity was the first man over the line with a fine K1 performance pushed on by second placed Liam Banks.
The Saturday evening is one of the biggest social events of the college calendar with the annual fancy dress party this year each college had to select its own theme which led to a colourful party with Crayons, angry birds, togas, gaffer tape people plus plenty more interesting outfits.
The Sunday was set for the freestyle showdown on Curragower wave unfortunately the levels were not playing games leaving the river too high for the main wave which meant a change in score sheets and a down river freestyle bonanza,
flat water cartwheels and loops led the way with some smooth kick flips on the downstream pile, followed with paddle spins and the customary deck popping manoeuvres kept the crowd alive and shouting. university of limerick once again led the way with some fine performances
a short drive back across town kept the crowds waiting for the results,
after a short riot outside the lecture theatre due to some free hats and t-shirts from Pyranha Kayaks causing quite a stir it was time to announce the winners,
in first place taking home a wave sport Diesel 60 from Wavesport Ireland was University of Limerick Canoe Club.
But they weren’t the only winners
Pyranha Kayaks came on board with The Great Outdoors to support the event offering the ‘Ultimate University’ the prize of 2 Pyranha kayaks. The prize was won by the club that was most active, most enthusiastic and contributed most fully across all the events, at the party and during the day – happy, friendly, fun students on and off the water.
By the end of the weekend this was affectionately know as the ‘Having the Craic’ award with this year’s winners DIT Dublin Institute of Technology taking the prize for a fun filled weekend and some super moments bringing a lot of smiles by everyone.
The Student Kayak Intervarsity’s will be back again in 2014 with the event coming back up to Dublin,
See you all next year. 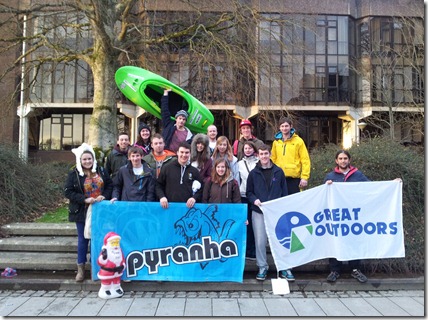