Having working in and around kayak shops for a number of years now including some great boat deals with various brands I’ve always had people asking me which boat to buy. Obviously as any sponsored paddler number one reason they are sponsored is to sell boats, But on the flipside that paddler is also been sponsored because they know a thing or two about paddlesport,
If you can pull an unbiased view from the paddler then its generally a good voice to hear
Below is a review written by me from my own thoughts of what I’ve seen, peoples views will differ and I’m not saying this is the definitive, just a personal opinion.
With all boats number one thing to do is demo the boats, most good kayak shops have a collection of demo boats, these are to be tried and tested in a reasonable environment, these are not boats to borrow until you have cash or boat to break as you yours is still shiny. Shops do actually have to pay for boats and they are actually not cheap. For Dublin based shops the usual testing grounds -Liffey -Boyne -Avonmore are acceptable, shops don’t like to hear of epic adventures on the source of the Liffey or Dargle when their demos are concerned.
Boats should always be returned clean and in as close condition as possible as when you took it, usual rules would always apply, You bend it you mend it, or You break it you buy it.
When you get the opportunity in a different boat the major points to consider,
Fit
Do you fit in the boat?
Are you falling about inside?
Foot / seat positioning and comfort
Size
Can you engage the edges?
Are you lost in the boat?
Where does the boat sit in the water?
Nose/tail heavy – Balance with kit
Hull ShapeFlat bottom or round hulled
Rails or not?
This is probably the most interesting of subjects for Irish Paddling, for those paddling in Ireland will know the nature of Irish rivers grade 1-3 generally wider and flatter but as you lift the grades the majority of Irish rivers turn into tight, steep, rocky runs, unlike the bigger volume alpine style of holes and wave trains through large boulders safely under the water. Irish creeks show every rock poking through the surface ready to trip or bounce you.
Boats which have historically sold well in Ireland
Dagger Mamba
Pyranha Burn
Dagger Nomad
Wavesport Habitat
Bliss stick Mystic.
Why have these boats sold so well?
Because they work!
The Jackson Villain S could be added as a late  contender to the list.
The majority of these boats are flat hulled river runners with plenty of volume, the Mystic and Habitat are still very creeky but have enough rail to hold a line the only round hulled boat would be the Nomad,
I feel the Nomad is now a classic and still works as a steep creeker with plenty of volume but slightly shorter than the newer boats making it far more manoeuvrable.
The flat hull offers a solid stable platform to plan your lines from with nice rails to provide a secondary stability to keep the boat riding high while hanging onto a line, then back in the easy stuff you can cruise about the river eddy hopping and ferrying to your hearts content.
The rounded hull allows good stability at any angle like sitting on a soccer ball. On big volume slides and drops the round hull eliminates the rail tripping for super smooth transfers.
Unfortunately some of the bigger round hulled creekers struggle in tight technical Irish Rock Gardens, with lots of volume they just want to bounce through anything you can throw at it but lacking that rail which helps manoeuvre the boat quickly in tight situations. You sometime end up as a pinball bouncing from rock to rock instead of smooth lines
All boats should be purchased for the majority of your paddling and not your single aspiration to run Niagara.
Buy something you can use and enjoy every week of the year, we all paddle to enjoy it.
Boat review time
After a nice few weeks way I had the opportunity to try a few different boats throughout Europe.
A some of you may have read my Large Shiva got stuck in Dublin airport for a few days resulting in a lend of a Jackson Karma Medium from Colm Healy @I-Canoe
I have for a while now been paddling 90 gallon plus boats in the big Villain and then the big Shiva so stepping back to a medium always gave me a sinking feeling. But I was pleasantly surprised. I loved my big villain one of the best boats I had paddled big, safe  and strong,  when I started the new job I had to give up the Jackson as my everyday boat so I was relishing the opportunity to at last try the Karma,
As a boat the Karma was like being back at home the same outfitting and seating arrangements I had been used to for a long time through three generations of All Star then the Rockstars, villains, fun runners,  through 9 Jackson boats previously. On the water the karma was responsive but I found nose heavy after some alterations with the seat she was running nose high in the safe responsive package I had always known, some people hate the outfitting but I love it, taking one fairly big impact, (I was running a slide on my head at the time, not my finest moment) she held strong and safe with no slipping of the ropes a roll in the bottom pool and I was off again..
A super boat, nice and quick in a straight line but responsive. 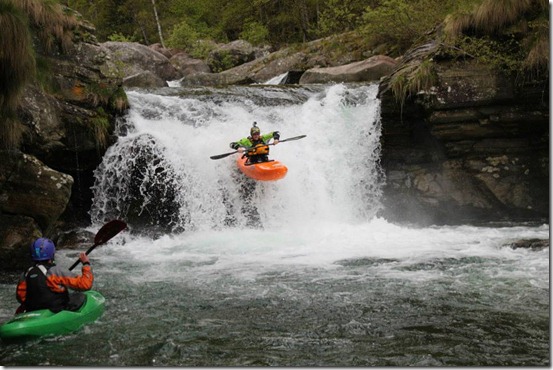 Jumping back into the round hull of the shiva – (once it arrived from the grasps of Aer Lingus) with the extra volume we could take on any drop, a super safe boat which wants to run the big stuff, skipping smoothly away from the foaming mess at the bottom, unfortunately she does the same skipping fast and true on a big drop as she does in a 3ft drop which without the rail usually ends up charging into which ever rock is in front of you. For tight technical creeking I found the Large Shiva just that bit too big.
For top to bottom, of any easy Irish run the shiva will storm in without slowing. But realistically its a big volume Norway boat, steep big volume the shiva will fly through.
The Shiva comes equipped with the standard Connect 30 with plastic pillars and heavy footrest I did a bit of boat lightening a few weeks ago to drop the weight down
Take a look Here – http://www.paddle4play.blogspot.ie/2013/05/pyranha-shiva-takes-diet.html
So the lightened outfitting held up perfectly, no issues at all the connect outfitting provides great control and security with comfy seat and secure backrest, I padded out the hip pads and shes ready to go, providing a secure comfy fit with good volume and space 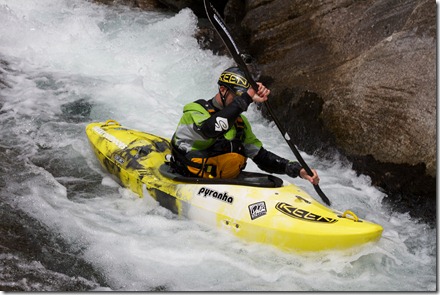 I did actually try the Medium and was surprised it was much more manoverable and felt snug without all the excess volume, I think the large is just a little too wide with the knee position still very close not giving you the control to push it over.
For my second trip away after some chatting to friends I took a shiny 2012 Mamba 8.6 with the contour ergo play seat for a spin,
Having never paddled a Mamba previously………. Ever!
I was in for a treat!

The big mamba was easy to adjust and make it fit me comfortably I left the seat central as straight from the factory, I inserted the extra seat pad and added hip pads and I was ready for the water. ive still to put in the foam heel blocks but these simply velcro in,
One thing with adjusting a boat is to fit it out with what your going to paddle in – if your using creek boots fit the boat while wearing them! it does make a huge difference,
heres some boat outfitting in playboats but gives an idea how to get a snug fit – http://www.paddle4play.blogspot.ie/2012/08/outfitting-kayak.html
So the Mamba,  like being back in a familiar friend, something I instantly felt safe and at home in. The seating was secure and comfy with the new leg lifter offering a snug fit to hold the legs up into the thigh braces.
First time on the water, the Passer in Merano Italy, A cruisey run down from the football pitches to the canoe club, alpine style read and run, waves and holes, with some weir style drops the boat moved around the river well, reacting safely on edge, carving and spining with ease. The big mamba at 89 gallons was as manoeuvrable as a much smaller river runner the flat bottem allowed the boat to plane and carve with the rounded nose and tail offering a great creeking shape, The Mambas first real test was the grade 5 + gorge just above the canoe club, which after a fantastic line utilising Graemes upside down boat the Mamba sailed through,
Check out more about this trip here – http://www.paddle4play.blogspot.ie/2013/06/king-of-alps.html
Racing the mamba was fast and furious with good hull speed and length it stayed on line and in speed, we have seen @Eoin Rheinisch  Paddling the large Mamba at this years Wacko taking the win.

So back to the boat, creeking in the Mamba is an absolute joy to behold, the boat is responsive and stable the mamba gives you a platform to push your limits, I felt I could put the boat anywhere on the river and really trust it to go where I wanted it, the boat wouldn’t hold me back, On the Urnasch in Switzerland the Mamba enjoyed Boofs, Flares, drops and tight technical creeking on both slides and drops the Mamba performed well – Even a bit of hole surfing.
Check out the video – 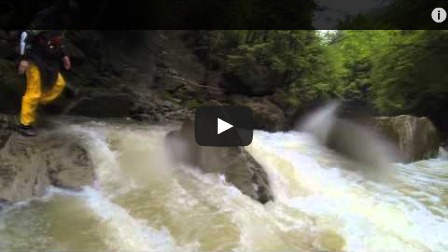 Il definately be paddling the mamba some more this year, I cant wait to try it back in Ireland on familiar waters.
In short, get out their and try some boats!