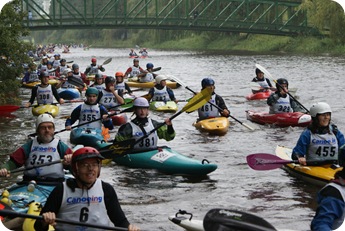 
The Liffey Descent no in its 56th year is one of the true spectacles of marathon racing both within Ireland and worldwide, being mentioned in the same sentence as both the Dusi and the Fish, it certainly holds highly amongst athletes.
The Liffey descent is a blue ribbon event for Canoeing Ireland and amongst Irish paddlers, with many training and challenging purely for this event each year the standard is high
The International Liffey Descent is one of the International Canoe Federations World Series Events with points available towards the world series of races.
As well as the true racing classes the Liffey descent is made up by a large number of recreational paddler whom are still entered in the race but for many the challenge is to merely complete the 28km course before sundown.
Before the event the pretension is high with athletes arriving from across Europe and others from further afield the days leading up to the event are spent scouting the weirs and prepping boats and nutrition for the event the K2 event is one of the most fiercely contended and leads out the event.
At the evening registration its all smiles as bibs are collected and t-shirts chosen but with one eye on the start lists to see who else is in the field there’s certainly an air of caution, with the competitive paddlers filing out quickly to finish preparation and get an early night the job is still to do.
As a general purpose paddler the registration is an excellent opportunity to sit down relax and grab a drink with friends you haven’t seen in the last year whether is travelling or other commitments the descent brings everyone together.
As the sun rises on Saturday Liffey Descent morning the calm misty waters of Dublin’s River Liffey are peaceful and still, the glasslike texture awaiting the thundering waters to be released from above and engulf the morning air with electricity and excitement. 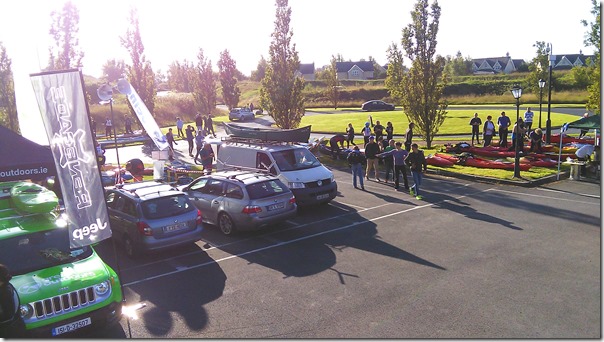 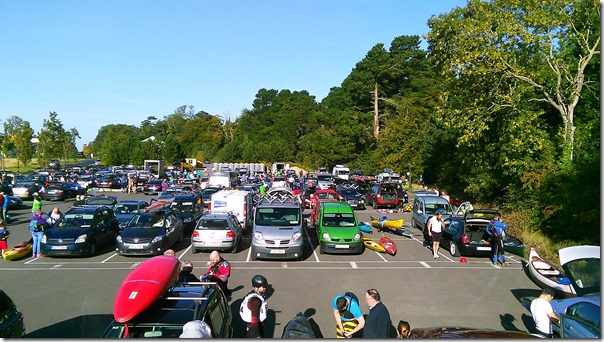 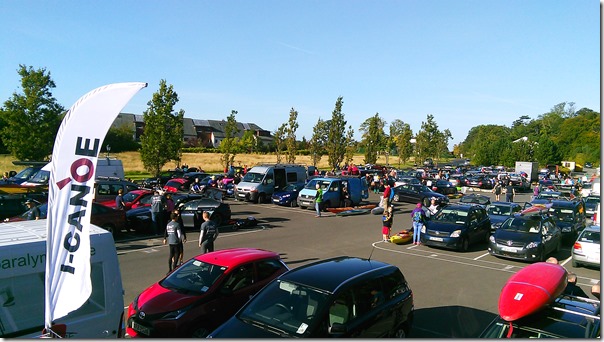 As the Sun lifts from its night time slumber the paddlers start arriving the sleepy heads are filled with excitement the Liffey descent morning provides a feeling like no other to simply stand at the start with people setting up and last minute airbags and bailers the atmosphere is alive with activity. As the crews start their slow paddle upstream to the start line the thoughts of the days racing ahead, a last peak over the mighty Straffan weir to pick the line will it be the tight fish shoot or the far right plunge a swim at this early stage would leave you behind the field with ground to make up, do you play it safe or go fast? With all these thoughts passing through the heads this and the other 9 Weirs, 1 portage and other river obstacles the thought process is utmost. how far ahead are you thinking is it luck or skill? a mistake by another crew can make or break your race. as you look at the start lists the favourites are picked but the difference with the Liffey Descent to many other events is the what ifs, its never a clear race and the winner can never be picked, and to many that’s what really makes the race, the strongest are never necessarily the best, you need to have both clean lines and pulling power to get out the way of the pack but with the dam open and 40 tonnes of cool white water pouring through the gates every second its not as simple as it sounds. 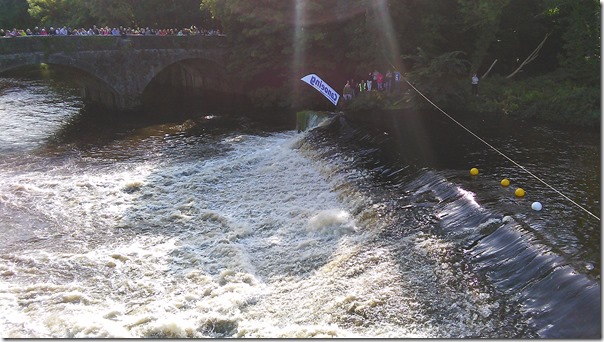 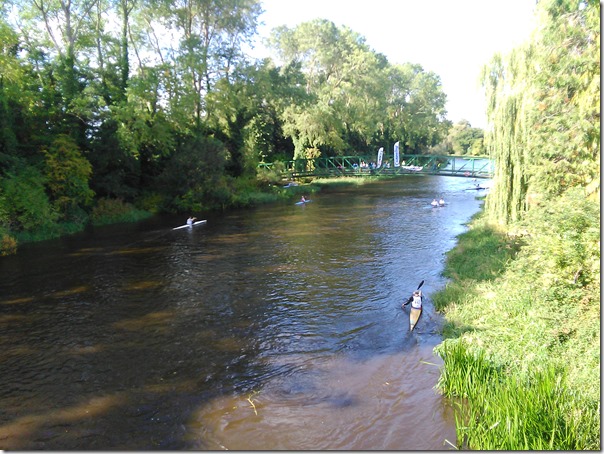 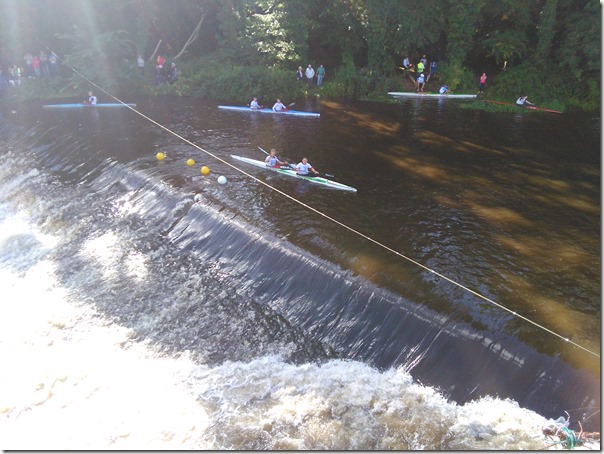 As the starters hold the racing lines up above the bridge and banks are loaded with spectators all waiting for a glimpse of the pack. The racers pushing the line until finally “BANG” and away are the first wave the K2 crews are tearing up the flat water as they approach Straffan the first weir on the journey to Liffey descent glory. Approaching the top as the crown peer on, the crews drop into file giving way to hope for a safe pass, as they feel the concrete flex on the hulls of there carbon and Kevlar racing boats the crunch and scrape as the rudder catches and lifts on the hard rock below and the scrape of the brace as they reach out with their winged paddles for purchase to keep their tippy racing machines upright. The crashing wave as they hit the bottom and the last reach for purchase in the airiated water below as the K2 pushes out into the clearwater and aims for the bridge arch and onwards to the next challenge rumble in the jungle the twisty turns and overhanging trees gives little space for attacking and overtaking so crews must pick their way unable to tap a constant rate the power is pushed to just as quickly be lost. By now crews will have in their minds who and where they are and this is where experience will pay knowing where and when to attack and push on with the crew in front measuring their efforts to avoid being caught its a careful balance that requires a huge amount of mental strength to stay on your game plan as well as the physical strength to hold on.
As the K2s steam into the jungle other waves will have started with a whole host of other boats from racing K1’s, WWR, then the General purpose class. 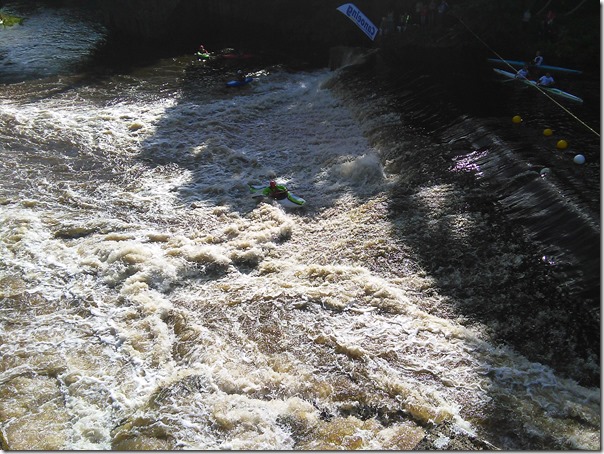 from the super competitive Gola sprints and deceptors looking for the win, these boats specifically built by Irish manufacturers in days gone by to fit into this general purpose category and really bring it into a racing class. behind them then roll on the plastic boats, dancers, Europa’s long and slick but nowhere near as fast as the carbon racers then the creekers the club paddler out to complete the task and enjoy every minute of it. last up come the Canadians, no not the country, the boats two or three person boats provide one of the most fun and exciting rides down the turbulent Liffey, being open top provides the danger of swamping and falling in with little ability to roll and being able to share the event with friends makes it a truly exciting way to spend a day out
. 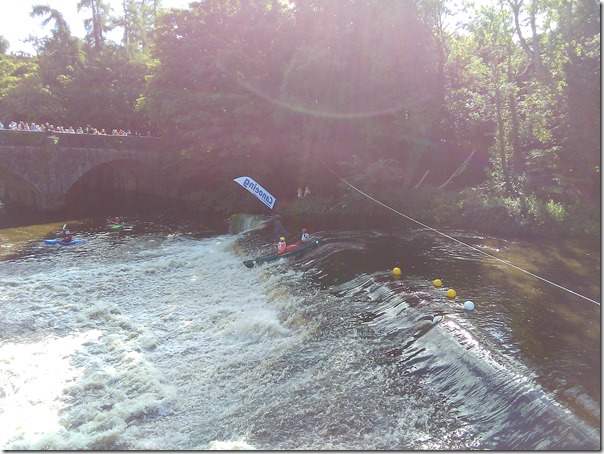 As the last of the paddlers drop over Straffan and the crowd still cheering the mass exodus begins, with worried parents and determined partners heading downstream cameras and water supplies in hand planning the next location to catch a shot or hand over the valuable drink.
The portage takes place following a 2km flat paddle across the Lake this is where the K2s can really open up the distance on the field hitting a rhythm and able to mentally push out the thoughts of the race gone and focus now on the race ahead, pulling into the beach at the far end its a 700m run with boats in hand around the Leixlip Dam. Along the service road and down the sloping path to end up riverside once more as you set back into your boat paddling out to avoid the threat of the Bridge arch and onwards towards the lower Liffey weirs, Sluice, Lucan, Shackletons, Wrens Nest, Palmerstown and Chapelizod weirs all ahead.
With plenty of potential for error and mistakes the race follows on the Sluice providing options of safe lines down the weir or running the main Sluice gate more commonly known for its freestyle hole and slalom course provides plenty of grounds for an unfortunate dip the fast paddle through to Lucan this is the second most famous weir on the river as it provides huge spectator areas and its famous High Drop on River Left or the sloping weir face river right both proving its own dangers as the spectators again line the bank eagerly awaiting the competitiors, waiting to see whos leading this far and whos made it or retired its all eyes on the lip as the first K2s hit the weir.
As the race follows onwards the highdrop becomes ever used providing some of the best photos from the day with smiles and wet times for many.with the rescue teams on hand to assist swimmers and safely reunite them with their boats and paddles and allow them to hopefully continue the race.
Meanwhile at the finish line the anxious feeling is rife, organisers, caterers and sponsors set up in a festival finish all awaiting the moment the first boat rounds the corner in the distance, all ever hopfull its an Irish crew out front. will it be a race for the line a sprint finish or a pulled out lead. the wait is on.
As the crew rounds the corner the anxious wait is short lived sub two hours from start to finish, the binoculars identify the leaders its an Irish driver and this time out on their own, all they need to do is ride to the finish line but they are still pushing driving, you can feel the intensity and grit in every stroke. The moment they cross the finish line and the relief followed by jubilation of hard work having paid off. 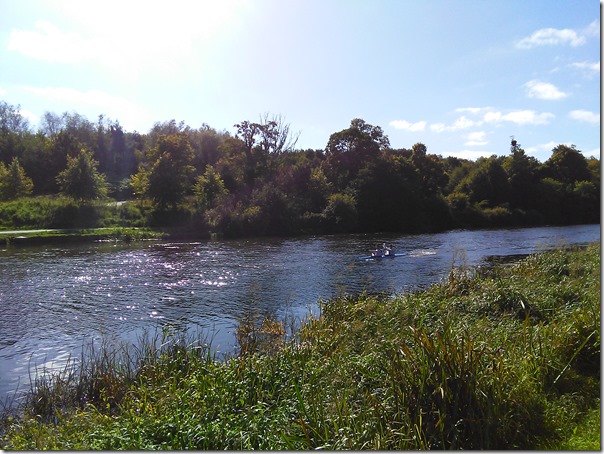 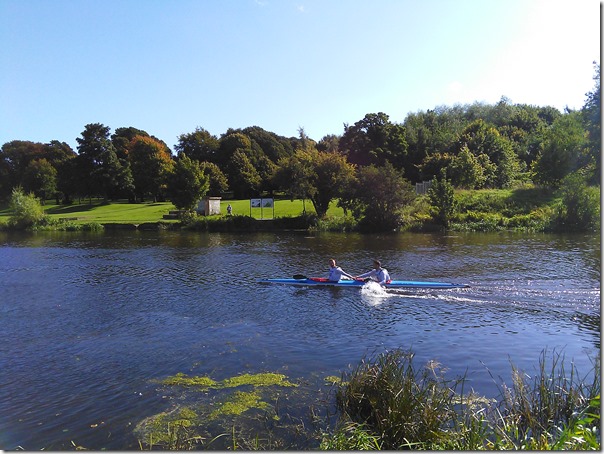 Whether its their first win or 10th it makes no difference the feeling of achievement and accomplishment having picked their way through the minefield and come out unscathed and out front is a feeling which is hard to match. the magic of the Liffey Descent lives on in all its winners, competitors and spectators its the one day a year where everyone comes out together forgetting any politics and stand together to feel the intensity and emotion the Liffey descent beholds. As the field filters its way into the finish the stories of clean lines, tumbles and spills develop the day involved will sit deeply within its competitors all taking away positives from the day and having an aim and challenge for the future. For many spectators the Liffey Descent is the reason they want to get into kayaking for world class athletes its about aiming for the records and for the avid paddlers its about the fun and enjoyment on the way down. 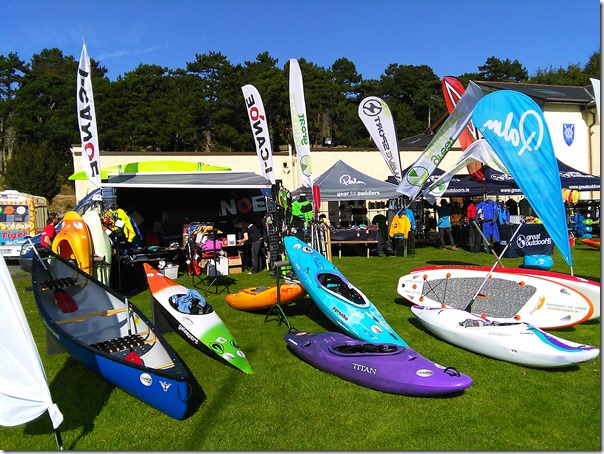 The Prize giving is applauded by all and achievements congratulated, before the evening party starts in typical Irish fashion the Guinness tap on overdrive pouring as many Pints as water flowing out of the dam today as the steady stream of drinks bring the stories and tales late into the night as the paddlers and athletes depart back to their homes around the country or out to the airport to catch a flight further afield everyone of them takes home a part of the Liffey descent magic and the drive to come back to this peaceful river flowing through the Irish countryside once more to the Magical Irish Liffey Descent.
See you next year

Here’s the start of the 2015 Liffey Descent from Straffan Weir.